What do you need to know about substituting almond flour for coconut flour? Learn more about how to replace coconut flour. Do you have a favorite coconut flour recipe that you want to use almond flour? Here are some tips and coconut flour substitutes that can help.

Get your almond flour here.

Which is better for baking, coconut flour or almond flour?

There is no one answer to this question. It depends on your preferences and what you try to achieve with your baking.

Almond flour is a more neutral-tasting flour. Coconut and almond flour are good options for low-carb recipes or those following the keto diet. And they are both gluten-free options.

You will want to try different flour alternatives if you have nut allergies. Tapioca flour or cassava flour would be a better flour substitute.

What is the almond flour debate?

Some people argue that almond flour is a healthier option than coconut flour. Others say that coconut flour is the better choice. It depends on your preferences and what you want in a recipe.

So, almond flour would be the better choice if you are looking for a low carb option that is higher in nutrients.

Almond flour is also a great source of Vitamin E.

What is unblanched almond flour?

Unblanched almond flour is made from whole almonds that have not been blanched (without the skin). The brown skin on the almonds gives the flour a darker color.

If you cannot find unblanched almond flour, you can make your own by grinding whole almonds in a food processor. Be sure to pulse the almonds, so they don’t turn into almond butter.

YES! Coconut and almond flour are both low carb and work well for the keto diet. But, almond flour has fewer carbs, so it’s an excellent choice for your baked goods.

Almond flour is a low-carb flour that can be used as a substitute for coconut flour in many baked goods recipes. Almond flour is made from ground almonds and is a great source of healthy fats, proteins, and fiber. You will need to have a strong food processor to make your almond flour. You need to have very finely ground flour. Otherwise, you may end up with almond butter.

Keep in mind that almond meal will not have a fluffy texture.

The two can be used interchangeably in most sweet treats when using almond flour instead of coconut flour. You just need to modify the amount.

These gluten-free flours can be used in baked goods like pie crusts or savory dishes.

You will need to use more coconut flour than almond flour. And, you need need to use more liquids. Some people add a bit of boiling water or more eggs to the recipe but it will depend on how the flour behaves in what you’re cooking.

Do you use the same amount of coconut flour as almond flour?

Wheat flours contain gluten and are not suitable. Both coconut flour and almond flour are gluten-free.

You will want to avoid regular all-purpose flour and wheat flour in your low-carb recipes. 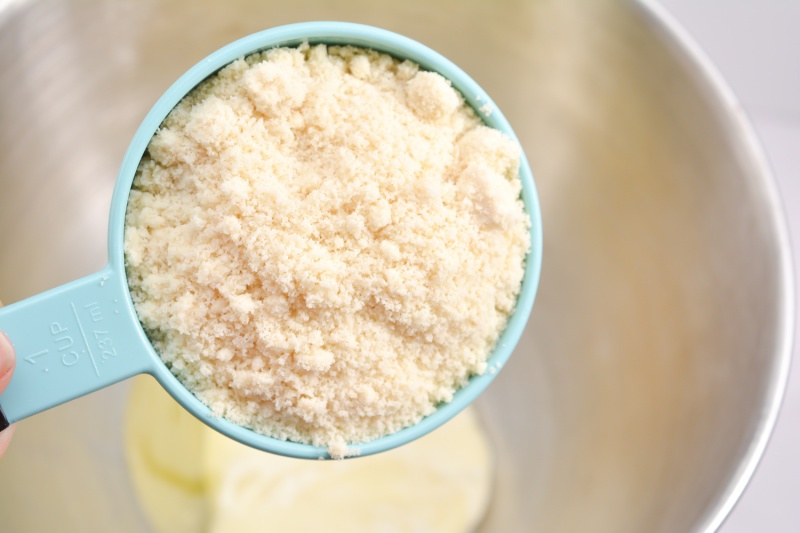 If you’re interested in low-carb baking and the keto diet, you can try a few low-carb flours. Avoid all-purpose, wheat, and rice flour on the keto diet.

For low-carb flours that work on the Paleo diet, you should avoid soy flour, white rice flour, wheat flour, and all-purpose flour.

These are all gluten-free and will work in keto recipes or for the low-carb lifestyle. Where can I buy coconut flour or almond flour?

You can purchase these gluten-free flour options at your local grocery store or online. Look in the specialty or natural sections of the store. Or you can find them here:

Get your almond flour here.

Ellen is a busy mom of a 25-year-old son and 29-year-old daughter and a grandma to an adorable girl. She owns 6 blogs and is addicted to social media. She shares simple tips and recipes for baking with almond flour. If you’d like to work together, email info@almondflourbaking.com to chat.

We are a participant in the Amazon Services LLC Associates Program, an affiliate advertising program designed to provide a means for us to earn fees by linking to Amazon.com and affiliated sites.